THE JEWELS OF THE 40s: FROM AUSERITY TO THE SEARCH FOR LIGHTHEARTEDNESS.

After a basic and simple fashion time of 1930’, during the 1940s, the code word was austerity. In fact, this historical moment is marked by the terrible passage of the Second World War and this is also reflected in the production of jewels: some factories have been converted, others have closed, while others have made a "virtue of necessity".

The transition from the Art Deco of the 1930s with precious and important jewels that had to contrast with the masculine style of the clothes.

This led to a production dedicated to saving materials. Bracelets empty inside and less solid but with a system of plates welded together. As for the gems used: both natural and synthetic stones. For necklaces, in the 1930s length was an element of great value. Instead, during the war it was better to opt for simpler and less bulky and shorter models. The snake-shaped necklace made in that period by Carlo Illario is a classic example of this type of pragmatism: the jewel, which can be dismantled, can be worn in at least four different shapes, creating three different models of necklaces and a bracelet. Link to the Model 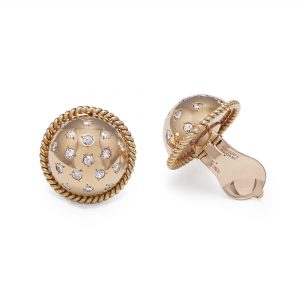 The earrings, as well as the brooches, also represented an iconic element, with much more practical and easy to use clip models. One of the examples of this model of earrings is the one proposed by Carlo Luca della Quercia of Van Cleef & Arpels, handmade in the New York workshops. Link to the Model

The sadness of the war period, after 1945, leaves room for lightheartedness. The jewels are becoming more and more showy, with shapes that reflect nature like flowers. Insects also give inspiration to give space to a new femininity after years of gray and dark colors.